Review: 'Belfast', Kenneth Branagh's biopic about a gathering war, seen through a child's eyes
Back
By Ken O'Brien
With ‘Belfast’, Kenneth Branagh’s biopic explaining why he came to have an English rather than Northern Irish accent as an adult, Dublin’s gritty sister city in the north east corner of the island has now its own iconic signature movie. It joins the canon with Dublin’s My Left Foot, Limerick’s Angela’s Ashes, and Cork’s? - well, we’ll have to wait for that one - perhaps something based on a Frank O’Connor story.

Released just as Putin unleashed his war on a population of innocent civilians, Branagh’s Belfast is based around the events that saw war visited upon Belfast in the late 1960s and early seventies, disrupting and destroying the lives and communities of ordinary people. 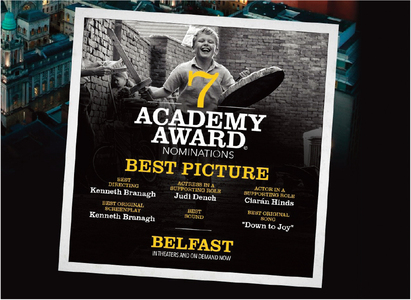 The story of the film, seen through the eyes of the eleven year old Branagh, his trials, fears, joys, and first love evolves through a year in the life, when his family, broken by the early events of the troubles was uprooted and transplanted to England, where his father was able to find good work. It was enough to provide ‘even a garden, and a room for each of the boys’, and the wherewithal to manage to keep up with the schedule of back tax repayments the family was saddled with.

As one would expect from Branagh, it is a stylish and classy movie. There’s great music, and dancing, and singing, executed by Branagh’s parents along the way, played by Catriona Balfe and Jamie Dornan, whose sixties hairstyling is just one example of the attention to detail one would expect of a great filmmaker.

The acting is also exceptional, from all of the principal players, featuring Branagh’s parents, played by Ciaran Hinds, and the now 87 year old Judi Dench, who delivers another star performance to match the 11 year old, Jude Hill, who, playing the young Kenneth, delivers a lynchpin performance that amazingly places the above great names as supporting actors.

The cinematography, and music, with due deference made along the way to iconic Belfast greats such as Van Morrison, and Danny Blanchflower, Northern Ireland’s football hero who was the first man to captain an Irish team in the World Cup.

Visually, the movie, shot throughout in black and white (except for the opening credits) pays visual homage to Belfast most strikingly in the series of dizzying colour shots of Belfast harbour and the Lagan taken looking down from the top of Goliath, the Harland & Wolff gantry that dominates Belfast’s waterfront.

All in all, the troubled story of a key moment in Branagh’s boyhood reveals a Belfast caught just before it was plunged into the vicious cycle of sectarian war and hatred that is it still recovering from.

Branagh’s father never bought into the sectarian narrative, and stood his ground against those who wished to embroil his family in the cycle of sectarian warfare that was beginning to get off the ground in 1969. He had to leave Northern Ireland, and was one of those who left. The finishing credits dedicates the movie to ‘those who left’, ‘those who stayed’, and ‘those whom we lost’.
This article appeared in the March 2022 edition.