Finance Dublin Comment: Covid-19: Ireland's unprecedented economic shock calls for 'All That it Takes' Fiscal and Monetary actions
Back
March 13th 2020 (updated: March 18th 2020): The unfolding Covid crisis is set to be the most severe external shock to the global and Irish economy since World War 2, but at least we can take some comfort in the fact that it will in scale be many times less severe than the war. Furthermore WW2 was a fight between humans while this is between humans and a virus. We can hope that at the end of it we will emerge with a new sense of global community in face of the external threat that the whole world faces.

An unprecedented shock calls for unprecedented action at the fiscal and monetary policy levels, no less than at other levels such as public health support.

The focus of fiscal and monetary policy should be on liquidity - supporting it for front line private sector providers of services throughout the supply chain for the duration of the crisis.

Fiscal policy is the more important - it is more flexible and acts faster. Therefore Treasuries rather than Central Banks will have a more important frontline role in the crisis.

Over a century ago, the author of 'How to Pay for the War' (WW2), John Maynard Keynes, said "you can't push a string" (referring to monetary policy). But you can pull a string, or let the grip you have on it relax, regarding fiscal policy to achieve quick and fast results to avoid distress and long term dislocation. 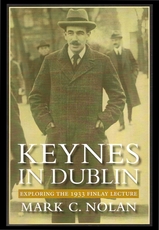 Ireland can be justifiably proud of the fiscal recovery and return to solvency and top grade credit ratings since the global financial meltdown. It understandably should be concerned that actions about the Covid 19 crisis should not jeopardise that progress. Likewise, the EU should be concerned that member states do not jeopardise the value of the euro in foreign exchange markets by excessively zealous fiscal policy. To date the EU at fiscal level and the Irish Government has only indicated a response equivalent to about 1 per cent of EU GDP, (in Ireland just over that - €3bn as a percentage of 2019 GNP of €258m amounting to no more than 1.2%). This however is unlikely to be enough, and a more expansionary approach in the UK and the US will provide the fiscal space to EU to be more aggressive in the coming days as this quick unfolding crisis develops. However now is not the time for faintheartedness; it is a time to risk rather than fall short - the long term damage to the Irish economy, and the wellbeing of the people whom it represents, resulting from too timid a fiscal response is sure to be greater than any short term setback to the long term path towards ever greater fiscal solvency.

In Ireland, at ECB level, and in global markets economic policy decisionmakers should open whatever spigots are available with the aim of assisting the private sector and taxpayers to continue to do their jobs, and above all to keep supply chains intact until the crisis passes.

Tax deferments in the VAT and PAYE/PRSI areas, commercial rates deferments, release of grants from grant giving agencies are examples of actions where the state can keep the private sector solvent and at work. In monetary policy, Irish lending rules and prudential ratios for banks should be temporarily relaxed to enable them to facilitate clients' liquidity.

Particularly vulnerable enterprises such as airlines and taxi drivers should receive close attention.

At monetary policy level, in Europe, the ECB, under the leadership of Christine Lagarde, should emulate Mario Draghi's 'whatever it takes' approach rather than countenancing a return to the era when the ECB's default option during the Duisenberg/Trichet era was to wait-and-see.

The Covid 19 crisis is most certainly likely to be shorter duration than World War II, although, from a global growth and markets point of view, 2020 will be a year of recession, for at least three quarters.

But, just as wartime resulted in changes in behaviour, many of them beneficial, such as the sense of social solidarity it generated by necessity, we can hope for similar responses, in Ireland, and in the world as a whole.

One of these benefits is likely to be an increased sense of global solidarity, as the message that we are one human family is most likely to be reinforced as we meet the challenges to come.

At state and Government level the responses of Governments taking wartime emergency responses is welcome, but also, hopefully will be a growing acceptance that individual taxpayers as distinct from Governments have responsibilities too. If it results in a more participative and responsibility-accepting society from the bottom up, it will have been a good thing.

Despite the shock, many realities will continue, and we can look forward to the hope that the world economy will not be damaged and that life will resume based on strong foundations that exist.

In this issue we can see vivid evidence of the strong foundations that exist in the 2020 Finance Dublin Deals of the Year Awards Nominations (page 8).

Almost 200 deals have been nominated, demonstrating the excellence in deal making and financial and legal innovation and expertise that is core to Ireland’s excellence as a jurisdiction.

The deals also illustrate the healthy balance that exists in the economy, including finance, property, financial services, aviation financing, and some of the most vibrant sectors of the economy, including pharma and healthcare, sectors that have been catapulted to the fore of our concerns. One of the biggest deals currently under way being the domiciliation of Abbvie, one of the front line pharma companies in Ireland that will be to the fore in innovations in medicine to defeat the covirus. In this connection it is also gratifying to note the designation by the WHO in recent weeks of Gilead Inc as leading the race for the most promising solution to cure or mitigate Covid 19 disease on trial as soon as the end of next month, with the hope that its Cork based EU manufacturing plant will hopefully be engaged in the manufacture and distribution to the medication to combat the virus in the EU by mid year - bringing a focus that provides hope for the positive outcomes when this pathological challenge is finally defeated.
This article appeared in the March 2020 edition.