Nevertheless, there are still too many hazards (see list on the panel) for there to be grounds for confidence that the worst of this eurozone crisis is over, let alone a survival of the euro.

The central importance of the euro crisis to the Irish economy, because the Irish currency is the euro, means that the future of both the economy at large, and the banking system remains impossible to forecast without a proper assessment of the eurozone crisis. This reflects the double and interrelated impact of the macroeconomic outlook and the nature of the balance sheet restructuring of the domestic banking system.

The ‘bail-in’ idea that has gained traction over the past month (emanating out of a consideration of the Spanish banking bailout) offers Ireland negotiating opportunities, it might appear, but this is likely to prove illusory.

This is because in the multifaceted 'game' being conducted over multiple eurozone finance minister meetings (last month's being just the latest in a long series), Ireland cannot gain leverage, or advantage, by playing a traditional single player advantage strategy - as our panel article below, ‘Game Theory and the Nash Equilibrium’ outlines.

Nevertheless, there remains two crystal clear realities: both of which point to the fact that Irish policy in regard both to its fiscal management, and its banking management does matter. Irish destinies in this scenario do therefore remain firmly in Irish hands – and the notion that the Troika, Angela Merkel, or anyone else is in charge, is a myth.

In this light, calls to downsize the IFSC, or to sell Irish banks for a song might therefore be best left unactioned. (The present equity value of the Government's bank bailouts (costing €65 bn) were put at just €10 bn (for the combined value of the state’s equity in AIB, Bank of Ireland, and IL&P) in an estimate made in July 2012 by NCB stockbrokers economist Brian Devine).

A positive course of action
The Government seems unlikely to abdicate control of the economy’s destinies, as fatalists might imagine, or to sell the state’s assets for a song. A course of positive action remains, encouraged, for example, by recent calls from the IMF to continue to tackle the fiscal deficit, the No 1. “elephant in the Irish room”, public sector and public welfare entitlements, and grow the FDI sector, while flying the flag of 'no compromise' on Irish taxing (and the 12.5 p.c. corporation tax and the spending powers of the national government). These fundamental areas remain outside the scope of fiscal federalism (so far), as the Stability Pact, and indeed the Maastricht Treaty, refer only to the difference between them - the size of the deficit.

In this latter respect, the IFSC international banking sector as a ‘jewel in the crown’ of the FDI sector of the economy is something which policy in Ireland can continue to encourage with all its energy and enthusiasm.

Elsewhere in this issue, we report on the aggregate profits of just two IFSC banks in the IFSC in 2011, Unicredit, and Citibank, who, between them alone will provide €115 million in corporation tax revenues this year to the Irish Exchequer in respect of their fiscal years 2011.

It is ludicrous therefore, for anyone to argue for the ‘downsizing’ of IFSC banks, let alone 'the IFSC', (as per Dan O'Brien, economics editor, of the Irish Times this month). The only logic for such an argument would be in the extreme (and most unlikely) case where a ‘fiscal federal’ solution to the eurozone banking crisis would require the imposition of burden sharing on Irish taxpayers at a point in the future as part of a bailout of ‘too big to fail’ banks that were located in the Irish jurisdiction. Such an outcome is too fanciful to imagine, especially given the latest evidence this month of the EU’s shift in the opposite direction. To argue for downsizing the IFSC in such circumstances is, therefore, as logical as arguing for the downsizing of the overseas electronics, or pharmaceutical sectors, for example, on the grounds that their failure might require a Government-funded bailout.

The eurozone ‘bail-in’
Spain's banking issues have concentrated the minds of the ECB, and the EU in recent weeks, and an indigenous solution emanating from Madrid has been jumped on by both the ECB and the Spanish Government.

An example is the proposal earlier this year from the Spanish free market think-tank Instituto Juan de Mariana of a forced debt-for-equity swap for the subordinated and senior unsecured liabilities of the Spanish banking system.

It proposed converting into equity 100 p.c. of the €88 billion of subordinated liabilities, and 40 p.c. of the €160 billion of senior unsecured debt of the Spanish banking system, together estimated to generate more than €150 billion of loss-absorbing equity for the Spanish banking system. Together with the estimated €25 billion in expected operating profits for 2012, before loss provisions, that would yield about €175 billion in new bank equity, without increasing the debt burden of the Spanish taxpayer or requiring a loan from Brussels, the Institute's director, Juan Ramon Rallo, said in an article in the Wall Street Journal Europe in June.

Faced with the possibility that even €100 billion of ESF money would not be enough to put Spain's banks back on their feet, as they could easily face losses of perhaps three times that amount, it is little wonder that the ECB would have been interested in the proposal.

“And don't forget the banks' additional exposure of €78 billion to Portugal and €10 billion to Greece and Ireland, which could add losses of between €40 billion or more to our calculation”, said Rallo.

“Spanish banks currently report total equity of €377 billion, so losses on this scale would leave them with just €50 billion to €70 billion in remaining equity. To bring them back to reasonable levels of capital would then require €150 billion to €170 billion—well above the €100 billion line of credit that the EU plans to offer. Thus, even if the Spanish Government chose to borrow the full amount on offer, national banks would still be undercapitalized by an amount equivalent to two or three years of their pre-provision operating profits”, he wrote. 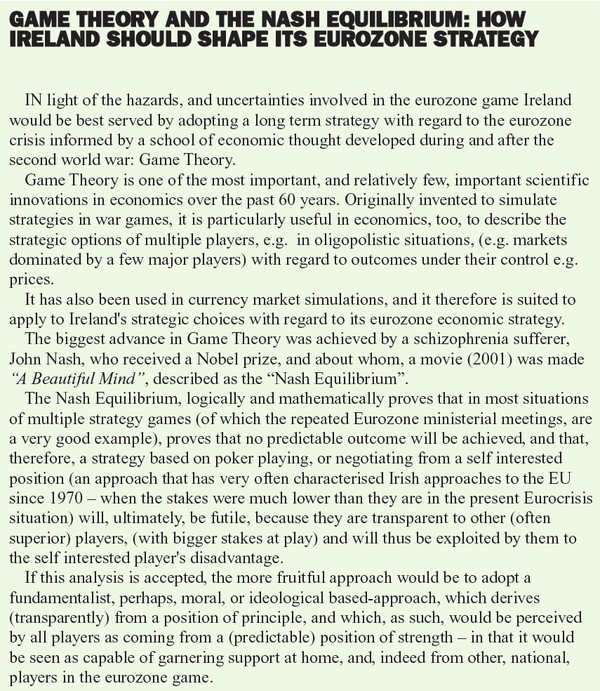 Writing in his weekly Supply, Demand & Curve commentary, Irish stockbroking firm Davy, economist Donal O'Mahony, made what perhaps is the telling assessment of the readiness of the ECB to shift its position regarding 'burden sharing' amongst unguaranteed senior bank bondholders: “Trichet's staunch opposition to burden sharing-sharing by Greek sovereign bondholders, voluntary or otherwise, was rationalised on systemic contagion grounds. Draghi, for his part, went so far as to accept a coercive outcome (and wittingly triggering CDSs), having thoroughly satisfied himself on the limited fall-out risks”.
And there we have it. The good news is that 'bailing in' will not cause the contagion it would have earlier on. As O'Mahony continues: “the evolution of ECB thinking in this matter is doubtless swayed by a sharp shrinkage in senior unsecured debt outstanding”.

ECB's shift has been followed by the politicos in Brussels. EU Commissioner for Financial Services Michel Barnier has now tabled a new EU bank insolvency regime by 2014 with regulatory empowerment for senior creditors to have claims 'reduced or converted to shares' from 2018 onwards.

Only days before these moves, writing in the Financal Times (on the LIBOR interest rate fixing controversy), ex CEO of Prudential Barclays de Zoete Wedd, Martin Jacomb said that banking had changed in two fundamental respects over the past half century: 1) banks which have big depositor bases and are interconnected are now deemed ‘too big to fail’; 2) banks are no longer owned by bankers, but by shareholders and/or funds. (The latter resulting in a less long term perspective on bank corporate values than hitherto).

Thus this month’s signs that the EU is making a move on one of the key obstacles to progress in the hazardous landscape facing the Irish economy is potentially good news.

It seems then that the EU is moving in a step change on this issue, and, by signalling to bond holders in European banks that they will not be guaranteed, they are ensuring that banking can become a viable industry in Europe again.

Of course there may be unintended consequences, and, in the short term, bondholders, perceiving that they will no longer get a free ride from taxpayer- funded government guarantees may demand a risk premium.

But, in the long run it brings the evaluation of risk back into the banking equation, and the proper apportionment, and appreciation of risk into a more open, transparent, arena, and out of the shadows that Irish observers are all too familiar with, - the night of September 30th 2008 being the most vivid example in recent Irish banking history.
This article appeared in the July 2012 edition.