FD conference 2010 provides many original insights into the future for the IFSC
Back
A photographic record of the two day conference on April 27th and 28th can be seen here:

The conference heard from from over 30 speakers, which included the Financial Regulator Matthew Elderfield, and a panel of leading Irish speakers on the IFSC included Cormac Kissane (Arthur Cox), chairman of the Consultative Group set up by the Regulator on the migration of regulatory powers from the Irish Stock Exchange to the Regulator under the Prospective Directive, Gerry Brady, CEO of Northern Trust Ireland on the Funds Industry, and Ernst & Young's PJ Henehan on the insurance industry, Peter O'Dwyer secretary of the Independent Directors Forum, and Barry O'Leary, chief executive of IDA Ireland. 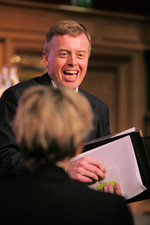 Matthew Elderfield (click)
The conference also heard an address by Stefan Gavell, global head of regulation of State Street, employing over 2,000 in the IFSC.

Also speaking at the conference was the newly appointed Treasury Minister of the Isle of Man, Anne Craine, who delivered her first international address.

(See a report on her speech at Isle of Man.com: http://isleofman.com/News/article.aspx?article=25857&area=2 )


Amongst the attendees at the two day conference were the Attorney General, Mr Paul Gallagher, and the Governor of the Central Bank, Patrick Honohan.

Amongst the speakers and attendees were delegates from over 20 other financial centres, including and deputy heads of regulatory authorities of several countries, including BVI, Gibraltar and Qatar.

The conference also heard papers from some of the world's leading thought leaders on the causes of the credit crisis and its solution, pointing to opportunities for countries and centres, including Ireland on how they can establish a roadmap out of the present financial crisis. 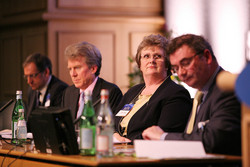 (L-R) Rod Roman, Head of EMEIA Banking Tax Team, Ernst & Young, Richard Hay, International Tax Principal & Head of the London Private Capital Group, Stikeman Elliott, Anne Craine, Treasury Minister, Isle of Man Government and Peter O'Dwyer, Director, Hainault Capital. (click)
Peter Wallison, whose analysis of the causes of the credit crisis provided the keynote address at the conference on Day 1 (Subscribers to Finance Dublin can read an article by Wallison, contributed by Wallison which is the main article in the April issue of Finance Dublin). Former SEC Commissioner Paul Atkins spoke, and he was joined by Dan Gallagher, former acting head of the Trading & Markets Division of the Securities and Exchange Commission of the USA up to March of this year. 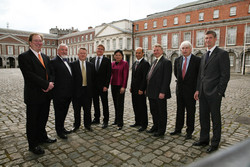 Clips of Wallison speaking on US network television on the Financial Crisis and Regulatory Reform can be seen by pasting the below links into your browser:

Among other speakers was Dan Mitchell, regarded by some as the leading global tax economist on offshore tax centres, and the taxation of offshore finance.

Mitchell was interviewed on Tuesday 27th April's RTE's 'Drive Time' on the paper he delivered at the Finance Dublin Conference.

His interview can be heard on the RTE website - Click on 'Tuesday'
.
Clips of Mitchell speaking on US network television on tax havens, Ireland, and the USA can be seen by pasting the below links into your browser:

Here is Wallison on his prediction of the sub prime crisis and bailout 9 years ago in an interview with Shepard Smith, on Fox News - 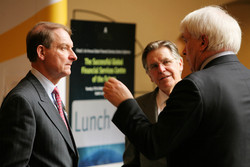 
Further Links to conference coverage on the web can be seen by pasting the below links into your browser: