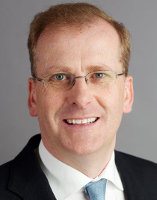 Tadhg Young is a senior vice president, country head of Ireland and head of Global Services for Ireland and the Channel Islands. Tadhg oversees the management of Ireland's largest fund services provider, servicing assets for some of the world's leading investment management firms and financial houses. He joined State Street in 2007 and before his current role was Chief Operating Officer of State Street International (Ireland) Limited. Prior to joining State Street, Tadhg was Head of Trustee, Custody and Middle Office Servicing with IBT Ireland (acquired by State Street in 2007). He has also held a number of senior management roles with Allianz Global Investors Ireland and Dresdner Bank in Ireland. He qualified as a chartered accountant while working as a tax consultant with PwC. Tadhg was a member of the Council of Irish Funds from 2013 to 2017 and was Chair of the industry body 2015/2016. He is currently a member of the Irish Funds Working Group. He is a fellow of the Institute of Chartered Accountants in Ireland and a member of the Irish Taxation Institute.