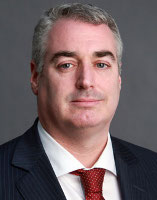 Paul McGarry SC whose term of office as Chairman of the Council of The Bar of Ireland ended in July 2018 was elected in 2016. During his time as chairman of the Council he was instrumental in promoting Ireland as a common law jurisdiction for options in finance and contracts, and has been a strong advocate of the need to protect an independent judiciary.
He was called to the Bar in 1996 and appointed Senior Counsel in 2010. He is a graduate of University College Dublin, having graduated with a Bachelor of Civil Law (BCL) in 1991 and LLM in European Law in 1992. He primarily practices in the area of public, commercial and European law.