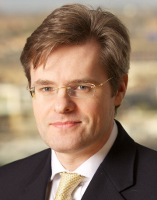 Gareth Murphy is Chief Risk Officer of Standard Life Aberdeen plc and Aberdeen Standard Investments. He joined Standard Life in January 2017 as Chief Risk Officer of Standard Life Investments and Deputy Group Chief Risk Officer. Previously, he spent six years as Director of Markets Supervision at the Central Bank of Ireland. During that time, he was also a member of Board of Supervisors of the European Securities and Markets Authority and chair of its Investment Management Standing Committee. From 1995, Gareth spent thirteen years in the investment banking and hedge fund industries, initially at Long-Term Capital Management, then at JP Morgan where he was Co-Head of European Equity Flow Derivatives and then at Castlegrove Capital Management where he was a partner. This period is book-ended by two stints at the Bank of England where he started his career as an economist in 1992 and subsequently returned during the financial crisis in 2008. Gareth Murphy graduated from University College Dublin with a BA in Mathematics and Economics. He holds a Diploma in Mathematical Statistics from the University of Cambridge and an MSc in Economics and Finance from the University of Warwick.