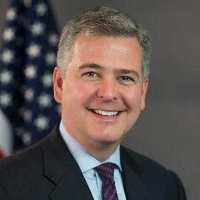 Daniel M Gallagher former Commissioner of the U.S. Securities and Exchange Commission (SEC) from November 7, 2011 to October 2, 2015, and is Deputy Chair of the Securities Department of WilmerHale. He was President of Patomak Global Partners, LLC, until 2017, was Chief Legal Officer of Mylan Corp, and is a former director of the Irish Stock Exchange. As SEC Commissioner, he directed the SEC's reform of Money Market Funds regulation in the United States. See Dan speaking about the last financial crisis and its potential to happen again on CNBC, Sept 9th 2018.

Mr. Gallagher previously served as the chief legal officer at Mylan N.V., a leading global pharmaceutical company; as the president of a financial services consulting firm; and as an SEC Commissioner. As an SEC Commissioner, Mr. Gallagher championed corporate governance reform, advocated for a comprehensive holistic review of equity market structural issues, and encouraged greatly improving the commission's fixed income market expertise. Mr. Gallagher also served on SEC staff in various senior roles, including as the deputy director and co-acting director of the Division of Trading and Markets, where he was on the front lines of the agency's response to the financial crisis, including representing the commission in the Lehman Brothers liquidation. He was also a counsel to former SEC Commissioner Paul Atkins and to former Chairman Christopher Cox, working on matters involving the Division of Enforcement and the Division of Trading and Markets. Earlier in his career, Mr. Gallagher was the senior vice president and general counsel of a global provider of financial services technology, where he managing all legal and regulatory matters. He first joined WilmerHale in 1993 as an associate in the firm's Securities Department. Professional Activities Mr. Gallagher serves on the boards of the National Association of Corporate Directors (NACD), a leading membership organization for corporate board directors, and Symbiont, a blockchain technology company developing products in smart contracts and distributed ledgers for use in capital markets. He was formerly a non-executive director of the Irish Stock Exchange. He is also on the advisory boards for the Institute for Law and Economics at the University of Pennsylvania and the Center for Corporate Governance, part of the Raj & Kamla Gupta Governance Institute in Drexel University's LeBow College of Business.