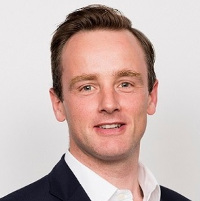 Buckley began his aviation career as an Aircraft Repair Design Engineer for UPS, and then for Lufthansa Technik. He joined GE in April 2003, as an Engine Lease Manager for GECAS Engine Leasing, where he was responsible for short term engine lease support to all airlines outside of the US. He subsequently held two other position, VP Marketing, Engine Leasing and then VP Structured Finance, covering the Middle East, Africa and Latin America, before leaving GECAS in 2010 to spend just over 5 years in Commercial Banking at GE Capital, the parent company of GECAS. During his time at GE Capital he worked in Risk, Finance, Debt Restructuring and Sales and Marketing prior to returning to GECAS, in December 2015.

He graduated from the University of Limerick with a B.Eng. Degree in Aeronautical Engineering in 1997 and subsequently with a Masters Degree in Business Administration in 2004.