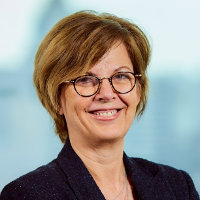 Prior to this, she was Managing Director and head of the Human Resources division of the Euroclear group from 2005 until 2009. Earlier in her career, Ms. Urbain was head of Product Management at Euroclear UK & Ireland (formerly CRESTCo), the central securities depository for UK domestic securities and Irish equities. Ms. Urbain was also a member of the Euroclear UK & Ireland Executive Committee.

Before moving to Euroclear UK & Ireland in 2003, Ms. Urbain was head of Network Management at Euroclear Bank's headquarters in Brussels. She and her team were responsible for managing Euroclear Bank's relationships with its worldwide network of cash and securities correspondents, including agent banks, other central securities depositories and transfer agents. Previously, Ms. Urbain was head of a team of relationship managers in Euroclear's Commercial division, with responsibility for Euroclear's clients in France, southern Europe and Latin America. Before this, she headed a Commercial team covering France, Ireland, the Channel Islands, the UK, the Netherlands and Scandinavia. She joined Euroclear in 1992 as an Account Officer. Before joining Euroclear, Ms. Urbain worked in the Investment Banking and Bond Sales departments of Banco Hispano Americano and in the Corporate Banking division of Continental Bank (both in Brussels).