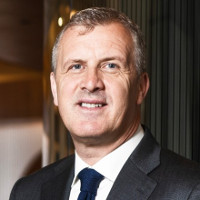 Pat Hannigan is President and Chief Commercial Officer of China Development Bank-owned CDB Aviation. Hannigan is an experienced executive having worked for three decades in finance, marketing, sales, and P&L oversight. Prior to CDB, he was Head of EMEA for Avolon, where he led the EMEA origination team, coordinating placement and remarketing of aircraft within the region. He was a founding shareholder of Avolon in 2010 and served as CEO of Avolon's leasing joint venture with Wells Fargo.

Previously, Hannigan served as Senior Vice President, Marketing, for RBS Aviation Capital (now SMBC), where he was responsible for managing airline relationships within the EMEA region and OEM manufacturer relationships. He also held the role of Vice President Marketing at GE Capital Aviation Services, where he managed the pricing and marketing support function, as well as led the development of the company's operations in the Middle East and Africa. During his career, Hannigan also held executive positions in business development, audit and corporate finance with Diageo and Deloitte and Touche. He is a fellow of the Institute of Chartered Accountants Ireland.