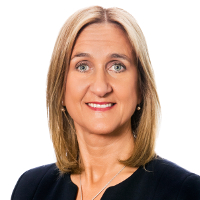 Mary O'Dea is Chief Executive of the Institute of Banking. Mary joined the Institute in April 2018 from the Central Bank of Ireland where she was Director of Securities and Markets Supervision. She was previously Ireland's representative at the World Bank and prior to that held the role of Alternate Executive Director representing Ireland with the International Monetary Fund. Mary previously held several director roles with the Central Bank of Ireland, including Director of Financial Operations, Consumer Director and Acting Chief Executive of the Financial Regulator.