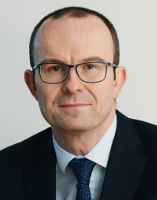 Mark is both a member of Institute of Chartered Accountants of Ireland and the Institute of Taxation in Ireland. Following completion of a Masters of Accounting in University College Dublin, Mark trained in PwC where he worked on large multi-national Irish owned businesses. Having spent 4 years in PwC, Mark then joined Speedy PLC and was responsible for setting up and developing the Irish operations in his role of Finance Director. In March 2011, Mark joined ASL Aviation Holdings where in his role as Group Financial Controller initially and currently Group Chief Financial Officer, has seen the business triple in size from a turnover base of €300m to almost €1bn in 2017. Mark has led global financings totaling over $200m over the last 12 months, global systems implementations including Hyperion and SAP as well as leading Due Diligence teams on ASL Group acquisitions. The most recent of these acquisitions was the acquisition of TNT Airways acquired from the TNT Group in 2016. Outside of work, Mark has represented Ireland at various underage levels in rugby and is also a keen runner and golfer.