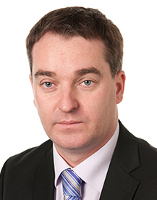 Robert Watt is an economist and has broad experience in both the public and private sector. He has worked in a range of roles within the Department as well as previously working with Indecon Economic Consultants and London Economics.

He has a primary degree in business studies and a masters in economics.