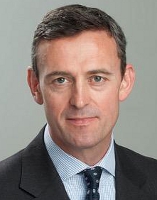 Jonathon Lowey has over 20 years' experience in financial services in Ireland and in Europe. He is Country Manager of Citadel Securities in Ireland and President of Banking & Payments Federation Ireland (BPFI). Citadel Securities is one of the largest financial trading companies in the world accounting for over 20% of the United States equity and listed equity options markets' trading volumes. The Irish entity forms a strategic part of the group's international expansion with trading having commenced from its Dublin office in January 2017. Jonathon was also appointed President of BPFI in January 2017, when he succeeded Bernard Byrne, CEO of AIB. In addition, Jonathon is on the Board of the European Banking Federation.

Before joining Citadel in November 2016, Jonathon had spent over 15 years at JPMorgan, most recently as Senior Country Business Manager and Chief Financial Officer in Ireland. From 2015 to 2016, he was Chair of the Federation of International Banks in Ireland. Prior to this, Jonathon had been Financial Controller of JPMorgan Bank Luxembourg, JPMorgan Asset Management Europe and Deputy General Manager of Robert Fleming in Luxembourg. During this time, he also served on the board of CCLux, a subsidiary of the Luxembourg Stock Exchange. Jonathon was an Auditor & Advisory Services Manager with Deloitte in Luxembourg between 1997 and 2000, having initially trained as a Chartered Accountant with Grant Thornton in Dublin after university.

Jonathon is a Fellow of Chartered Accountants Ireland and a Certified Bank Director through the Institute of Banking. He has a Master's Degree and a Bachelor's Degree in Economics from University College Dublin and a Diploma in Accounting from Ulster University.