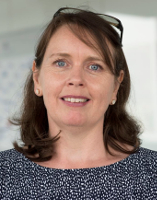 Fiona van Echelpoel is Head of Oversight Division in the Directorate General Market Infrastructure and Payments (DG-MIP) of the ECB since September 2015. She has a broad background in central banking, having worked in a number of functions in the market infrastructure and market operations areas of the ECB since its establishment in 1998 and previously for its forerunner the European Monetary Institute (EMI); prior to that she worked at the Central Bank of Ireland. She has represented the ECB in various European and international fora over the years and currently chairs the ESCB Payments and Securities Oversight Working Group. She holds a degree in Economics and Politics from University College Dublin.