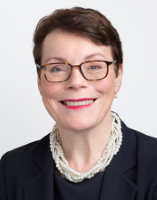 Catherine McGuinness is chairman of the Policy and Resources Committee of the City of London Corporation, responsible for taking a lead on policy issues affecting the UK's financial and related professional services sector.

She has led the City's work on education, chairing its Education Board and the City of London Academies Trust. Catherine has also been closely involved with the City's cultural offer, having chaired the boards of the Barbican Arts Centre and Guildhall School of Music & Drama, and with the City's relationship with Northern Ireland.

She is a director of "London Works", a recruitment agency launched by the East London Business Alliance, and a commissioner on the IPPR Commission on Economic Justice.

A solicitor by training, Catherine is a specialist in financial law.

She has been a deputy chairman of the Policy and Resources Committee of the City of London since May 2013. In that role she supports the chairman in particular on the City Corporation's work for London generally, and financial services regulatory matters.

She is involved in the City's Green Finance Initiative, launched in January 2016.

She was also initial chair of governors of the City Academy, Hackney, an academy co-sponsored by the City of London Corporation and KPMG, where she remains a governor.

Catherine has been closely involved in the City's relationship with Northern Ireland, working in particular on business and cultural links. She is a director of a charitable trust based in Derry-Londonderry focusing on physical, social and economic regeneration.

Outside the City, Catherine is a capital markets and derivatives lawyer. Formerly a partner at a City law firm and subsequently head of the London legal department in a major Italian bank, she has worked in the hedge fund sector.

Catherine holds an MA from Oxford University, where she attended St Anne's College and studied PPE, and an honorary fellowship from the Guildhall School of Music & Drama.