‘Brexit’ threat to the IFSC may be greater than some scenarios suggest
Back
Potential net gains to the IFSC arising from a rush of non EU institutions to set up in Ireland as a base within the EU single financial services market would be offset by limitations to trade with the UK, as it emerges that the UK is the destination for over 21 p.c. of Ireland’s IFS exports. Furthermore, despite the UK’s image as a global financial services centre, bilateral trade in finance between the two countries is far more important to Ireland, as Ireland exports four times as much financial services in value terms to the UK than it imports.
The pattern of IFSC trading relationships highlighted by the figures underscores the empirical reality that a key attraction of the IFSC historically has been its access to the UK market as part and parcel of the EU single market, something that would be put in jeopardy by a UK withdrawal.

Speculation that Ireland as a centre could gain as an EU platform, displacing existing ‘EU platform’ business in London remain speculative and should be balanced against potential disruption in existing business relationships between Ireland, the UK, and other common law jurisdictions, such as the United States.

Although business patterns ahead of a potential ‘Brexit’ would not be likely to strongly predict post Brexit outcomes, there have been few pre Brexit business location decisions that could indicate the possibility of a rush of new FDI into the IFSC, Credit Suisse’s decision at the end of last year, and arguably Citi’s consolidation of its EMEA Citi plc business in Ireland being cases in point.

The insight into the IFSC’s trade patterns is contained in new 2014-2015 Balance of Payments data published by the CSO, and analysed in the Finance Dublin Yearbook 2016.

In 2014, 36.5p.c. of exports went to the EU 28 other than the UK, which points to the well diversified nature of IFSC exports, with some two thirds going to countries other than a post-Brexit European union. As the table on this page shows, Asia, and the United States account for a similar proportion to that of the UK.

The trends also indicate that diversification is seeing the IFSC over time reducing its dependence on the EU, with Asia growing as a market, from 13.1 of the total in 2010 to 14.6 in 2014, and the UK itself growing from 20.25 of exports in 2010 to the latest 21.3 per cent.
The Yearbook also contains the latest overall figures for IFS exports as compiled by the CSO for last year.

The IFS sector fully contributed to the overall growth rate in the Irish economy in 2015, which made it the fastest growing of all OECD 34 countries.

The international financial services sector last year accounted for 7.4 per cent of national income in Ireland (not including the share of domestic financial services in the economy), which indicates the critical importance that the sector has become for the Irish economy.

Its size, and uncertain future in the context of ‘Brexit’, contrary to any hopes that Ireland could gain from a British withdrawal because of access to a market, which only takes a third of its total export trade is a sobering reminder of the Brexit threat that IFS shares with other sectors in which Foreign Direct Investment is a major factor. 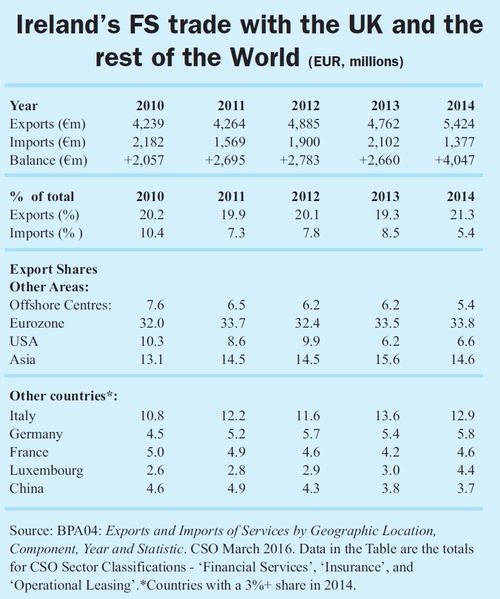 It follows that EU member states with closer FS market links, experience, and trade connections within the EU 28 markets, notably Luxembourg, might stand ready to gain disproportionately from a Brexit exit from London of international banks and finance companies.

This furthermore suggests that one of the attractions of the IFSC historically has been its access to the UK market as part and parcel of the EU single market, something that would be lost from a UK withdrawal.

Tax and Brexit:
Tax developments may also work to counteract the perceived advantages the IFSC may gain from the possibility, for example, that non-EU banks and insurance companies may not be free to set up a subsidiary in London and branch out to other member states.

This month’s issue of the Irish Tax Monitor highlights the increasingly serious competition for FDI emerging as a result of the UK’s improving tax competitiveness vis a vis the Republic. Furthermore this is exacerbated by the fact the Republic is increasingly in the sights of UK legislators as its No 1 competitor for FDI.

Writing in the Tax Monitor, PwC’s John O’Leary says that while the UK may suffer from limitations on its access to the single FS market, on the other hand, a ‘brexit’ would offer the UK the freedom to diverge from EU legislation and case law and, instead, particularly in the area of VAT, shape legislation in line with its national interests. For example, the UK could ignore ‘unhelpful ECJ jurisprudence’ that is serving to narrow VAT exemptions in a number of areas. Therefore, the Irish FS industry could be put at a competitive disadvantage (potentially higher irrecoverable VAT cost versus the city of London).

This is one example of how overall, the Republic could find itself at a disadvantage compared with the UK, which could pitch itself as relatively free from EU-centred initiatives to limit the scope of tax competition amongst individual member states.
This article appeared in the May 2016 edition.