Analysis: the Central Bank review of the history of reinsurance in Ireland
Back
John Lyons analyses a Central Bank paper on the history of Ireland’s reinsurance sector, with the first company predating the establishment of the IFSC by 12 years, to the current issues facing the sector with the introduction of new rules under Solvency II.
The new Quarterly Bulletin of the Central Bank includes a research paper examining the reinsurance industry in Ireland, looking at both the “captive” and “non-captive” sectors. The authors, economists Anne-Marie Kelly and Bridin O’Leary, have had access to supervisory data from the Central Bank which reminds us that the “Blue Book” has not yet been expanded to include reinsurers despite being regulated entities since 1989. 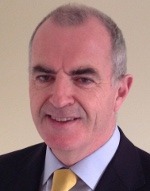 John Lyons
The authors first trace the rise of Ireland as a base for reinsurers and captive reinsurers since the establishment of the IFSC, growing from 4 companies in 1987 to over 160 in 2005. Since then it has fallen back to just 85 in 2012 (see chart). A number of reasons are suggested for the decline including the introduction of the Reinsurance Directive of 2006 which both imposed more regulation and allowed more consolidation in a single location. Solvency II is another factor with smaller companies, having more concentrated business lines, likely to merge to improve their balance sheets and use of capital under the new criteria. The increased cost of regulation and its administration under Solvency II is also a big factor for captives and smaller companies, although the impact has been somewhat mitigated by the PRISM system which generally treats captives as low risk. The fall in the number of captive reinsurers was 53% between 2010 and 2012 and there were just 34 of these at end 2012. The number of non-captives fell by just 32% in the same period to 51. The parent countries of the remaining companies are quite diverse, Bermuda being the largest for non-captives with 10 while Spain is biggest among captives with 7.

It would have been interesting to see what the corresponding change in premium income was over this period to see if it supports the consolidation argument. It would also be interesting to know how the position has changed in other countries, especially Luxembourg, and if Ireland has lost competitiveness. Despite the fall in numbers the paper does show that we have still the second highest number of reinsurance companies in Europe with 19% of the total compared to Luxembourg, the leader, with 53%. 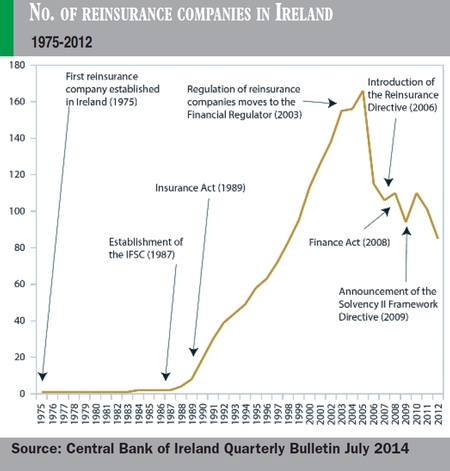 The authors then examine the impact of the industry on the Irish economy noting that, despite having assets of €55 billion equal to 34% of GDP, it only contributes 0.4% of GDP in terms of “gross value added” and just over 400 direct jobs. They do however acknowledge that the industry contributes indirectly to the economy through the purchase of services. They might have added that it also plays a part in confirming Ireland as a base for all insurance, direct and reinsurance. Tax is another factor with the reinsurance industry paying an average of €237 million in taxes between 2010 and 2012, although it is not possible to identify how much of this went to Ireland and how much to other countries.

Apart from the negative implications of Solvency II the authors see some potential benefits in it for the reinsurance industry. The focus on insurance companies’ risk management techniques may result in greater demand for reinsurance cover, and a greater focus on default risk should favour companies that are based in the EU or have an “equivalent” regulatory regime (e.g. Bermuda and Switzerland). Against this competition from Cat bonds and other insurance-linked securities could have a negative impact as discussed in Finance Dublin in our May issue.

Finally the article considers the financial stability risks. It notes that the solvency ratio for the industry in 2012 stood at 342% and has been trending upwards. This is a bit below the European median but that may be due to the higher number of captives in Ireland as captives tend to have lower solvency ratios. Profits have been broadly in line with European norms and the Irish based companies made a profit in every year from 2007 to 2012 with the exception of 2008. The authors note that technical reserves have fallen substantially between 2010 and 2012 and express concern that reserves may have been released to maintain profit levels. However the fall in reserves could also be due to falling premium levels and, again, it is a pity that they don’t give premium data. They also look at the asset breakdown of the reinsurers (mostly government and corporate bonds) and note that, while the quality has come down, it is still investment grade and conservative. Finally, they note that there is only limited risk to domestic financial stability as the reinsurance business is predominantly with non-residents.
John Lyons is an actuary and non-executive director and is insurance correspondent of Finance Dublin.
This article appeared in the August 2014 edition.