Original 'IFSC' corporation tax contribution was 16 per cent of total for the entire Irish economy in 2010, with total for IFS of the order of one quarter of the whole
Back
Latest statistics released by the Revenue Commissioners show the corporation tax take from IFSC companies has stablised in 2010. The 2010 yield of €625.8 million is down from €642 million (a fall of 2.5 per cent) but this shows a stabilising of the figures following a drop of 15.2 per cent in 2008 and 25.2 per cent in 2009. 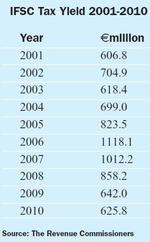 The fall brings the tax yield from IFSC companies close to the 2003 level of €618.4 million.

The IFSC figures released by Revenue only include companies that held IFSC certificates, therefore any international financial services firm set up in Ireland after 2002 is not included in Revenue's calculations for IFSC tax yield. Taking into account that less than 50 per cent of the companies in the Finance Dublin Yearbook are companies that operated under the IFSC tax regime the actual tax yield from IFS companies is actually much higher than Revenue's IFSC figure of €625.8 million. The total corporation tax take for 2010 was €3.9 billion, down from €5.3 billion in 2009. This puts the IFSC tax contribution at 16 per cent of the total for the entire economy, indicating that approximately a quarter of the whole is now coming from international financial services
This article appeared in the April 2011 edition.