FF supports 'constructive' but not 'uncritical' engagement with BEPS process
Back
Fianna Fail supports further growth of financial services based on fair tax competition rather than tax harmonisations, writes the party's Finance Spokesperson Michael McGrath. He says that Ireland’s unprecedented success in the technology sector creates excellent opportunity for growth in FS, and reiterates his call for a financial services cluster to be established in Cork, making it a key hub for financial technology.
It is just under 30 years since the IFSC was established by Fianna Fail in government. It has been a remarkable success story and IFSC companies now employ 36,000 people directly, paid €545m in corporation tax in 2014 and contribute over 7% to the country’s GDP.

While there are many factors which have underpinned the growth of the IFSC, a number stand out in particular. First amongst these has been an absolute commitment to maintaining Ireland’s 12.5% corporation tax rate. Irish governments have consistently made it clear that direct taxation is primarily a matter for member states and that fair tax competition, not tax harmonisation, is the basis on which the EU can compete with the rest of the world. 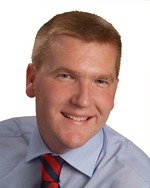 Michael McGrath
Fianna Fail supports a constructive engagement with the BEPS process. However we will not do so uncritically. The proposals on the table at the moment appear to leave much to the discretion of individual tax authorities. We must be alive to the possibility that other countries may not act with the same consistency and transparency as the Irish Revenue Commissioners when there is international competition for large employers.

Fianna Fail has also consistently expressed concerns about the impact of any potential financial transactions tax on Ireland, particularly if the UK was not part of such an arrangement. While the revenue potential of such a tax may be attractive for governments, we cannot lose sight of the negative consequences it could have on the financial services sector which, by its very nature, is highly mobile.

The UK itself is going through a period of potentially significant change in its relationship with Europe. In terms of risks to the Irish Financial Services sector, the potential for the UK to decide to leave the EU is one of the most important. Due of the interdependencies of the two countries, it is in Ireland’s interest that the UK remains in the EU and Ireland must play a central role in achieving this in our own national interest.

Ireland has an international reputation for excellence in education, particularly in the area of finance graduates. A key factor in the success of the IFSC has been the availability of a pool of highly talented professionals. In our forthcoming manifesto, Fianna Fail commits to increasing investment in higher level education, particularly in the research area. In addition, I believe the existing strong links between third level educational institutions and the financial services industry should be further enhanced and broadened to include second level schools as well.

The regulatory environment which saw the collapse of the domestic banking sector was a cause of huge reputational damage for Ireland. This could have had a very negative spill-over effect on the IFSC, but the sector faced up to this and clearly communicated the strength of its regulatory compliance and the robustness of its regulatory environment. Clear and effective regulation of the financial services sector should be always viewed as a competitive advantage for the IFSC rather than a burden.

Our aim should always be to achieve international best practice in regulation. A strong regulatory framework should not stifle innovation and supervisory resources should be directed most heavily on those firms whose failure would pose the greatest risk to the domestic and international economy and the interests of consumers. Where changes to regulations are made, care must be taken to ensure that all stakeholders are actively engaged and sufficient notice periods are given for implementation. We have nothing to fear and much to gain from a best in class regulatory system.

Excellent growth opportunities continue to exist for the financial services sector in Ireland. Just as we have proactively achieved a world leading position in the administration and domiciling of internationally distributed investment funds, we should continue to target growth areas such as the out-sourcing of middle office asset management functions, the development of socially responsible investing, Islamic finance and the cross border pension sector.

While significant challenges exist for the IFSC, I am convinced this is a time of great opportunity. I am confident that with the appropriate regulatory environment, infrastructural investment and an effective marketing of its capabilities, the next chapter in the IFSC’s history will see it enjoy significant employment growth and continue to make a major contribution to Ireland’s economic future. Fianna Fail is determined to make this happen.
This article appeared in the February 2016 edition.