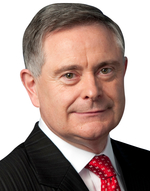 Brendan Howlin
The importance of getting IFS strategy right is clear to us all now. The domestic banking crisis has scarred this nation for the last eight years. Thankfully, as a result of this Government’s efforts, Ireland is now emerging from recession. Economic growth is strong, employment is returning to pre-crisis levels and business sentiment is similarly strong. Labour remains committed to the 12.5% Corporation Tax rate as a vital engine of this growth. Maintaining the recovery is arguably the key contribution Government can make to the IFS sector in the years ahead.

The IFS sector is particularly susceptible to political instability. Ireland Inc. is currently benefitting from the political stability a Government with a large majority has been able to deliver over the last five years. While it would be naive to expect the Government to be returned with a similar majority, it is essential that a Government with a working majority is returned. The only offering before the electorate that can achieve that is the current Government, Labour and Fine Gael.

The strategy’s key goal is to promote the development of Ireland as a key IFS hub in all the sub sectors - banking, insurance, funds and asset management, payments and business services.

And at the heart of that key goal is to grow the number of jobs in the sector by 30% in the five years to 2020. It is an ambitious target but a realisable one.

One of the key differentiators between this Government and previous Governments is the emphasis we have put on the delivery of strategies rather than their announcement. As you will be aware IFS2020 has a strong implementation framework including a Joint Committee, chaired by the Minister for State with responsibility for the sector. The first year progress report indicates a success rate of 97% on planned goals and targets. It is an encouraging start. No more so than in the area of employment where numbers increased by almost 7.5% last year alone, 2,600 new jobs, bringing the total employment figure to over 38,000 in line with our long term plan.

Labour supports too the recently published action plan for 2016 to promote and market the IFS sector under the new brand of IFS Ireland - developed with the industry. We have seen how successful Ireland has been marketing other sectors - we have just enjoyed our best tourism year ever - so let it be with the with the financial services industry. Other elements of the 2016 agenda include programmes like an Enterprise Ireland fund for the FinTech sector, a continued emphasis on upskilling and professional development.

There are of course obstacles ahead. Or should I say challenges. There is economic turbulence in the far east, particularly focussed on China. On the upside there are increasing signs of more robust growth in Europe which will have an important impact on Ireland. One of the difficulties Ireland faced as we fought our way out of the financial crisis was the continuing headwind arising from the sluggishness of the European economy. Nonetheless, we will have to be vigilant here.

The likelihood of a referendum on Britain’s membership of the European Union is another issue that we will have to keep an eye on. It has destabilising potential and we will closely monitor developments from now on.

Labour is concerned at the possible loss of Irish headquartered banks, particularly AIB, which is currently in state hands.

While we have committed to an IPO of 25% of the bank in line with the existing Government decisions, we would like to see a further review of the options available to state thereafter. This is a decision we should not take lightly.
Brendan Howlin TD is Minister for Public Expenditure and Reform and deputy leader of the Labour Party.
This article appeared in the February 2016 edition.